“I know my potential to create change.” 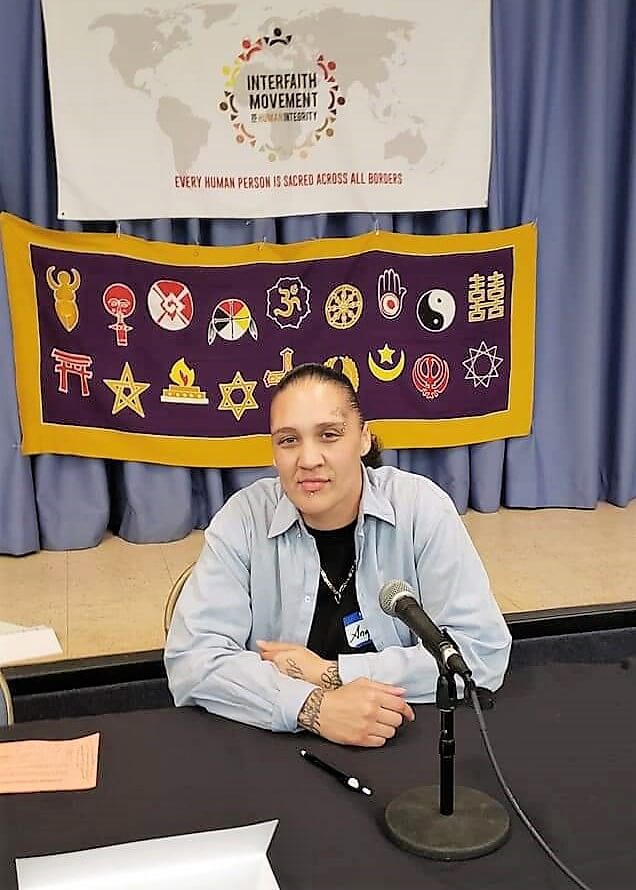 A New Way of Life is full of women with redemption stories. Women whose past traumas and their past crimes no longer define them. Former resident Angelique Evans is proof that even recent mistakes don’t have to derail the future.

Born in Oakland to drug-addicted parents, Angelique landed in foster care as a baby. Her paternal grandparents managed to gain custody, but not before Angelique was raped in a foster home at the age of 3.

Because Angelique grew up mainly around her father and his family, she had a front row seat to witness his turnaround. He became highly involved in Narcotics Anonymous and Alcoholics Anonymous and often brought Angelique to his meetings. “I was raised in those rooms, playing dominos, listening and learning. My dad was a very powerful man. When he spoke, people paid attention,” Angelique says. “And I really loved my dad. I became a daddy’s girl.”

But Angelique’s dad was gone a lot, and she took on the role of “little mother,” looking after her eight younger siblings. Her mom would sometimes take care of all of the kids, but she was often high at the time. When she was 9, Angelique was raped by a family member, but rather than receiving care from her mother, she was beaten for telling her what had happened. As a result of the trauma and turmoil in her home, Angelique started drinking and tried powder cocaine at age 12. By age 13 she was addicted to both cocaine and alcohol, selling drugs to take care of herself and her family.

She began to cycle in and out of the juvenile detention system. After stealing and crashing her dad’s car, a judge told her, “You’re going to end up in the penitentiary. I promise you that.”

And sure enough, Angelique did end up in the penitentiary, cycling in and out for various offenses until most recently serving her longest sentence of 10 years.

Four months before she paroled in June 2018, her father died. “Being in prison and hearing that, it was like my world stopped,” she said.

When she left prison and came to A New Way of Life, she began indulging in drug use again. She had continued hanging around negative influences, and her father’s death was taking a toll on her. “It was my choice. No one made me do it,” she says of her relapse.

But using didn’t make her feel good; in fact, she felt terrible. Then she had a vision of herself dying, just like her father had. At that point, Angelique took control of the situation and made the decision to tell a housemate she had relapsed.  “She was like, ‘I knew something was wrong with you, but I didn’t know what.’ I was very discreet, but they could see a change in me,” Angelique says.

As Angelique prepared to also come clean to ANWOL staff about her relapse, something providential happened. Shortly after Angelique made her decision to seek help, Susan Burton, perhaps sensing something was wrong, made an announcement during house morning meditation. “I was supposed to go to CIW [California Institution for Women] today, but they didn’t let me in,” she said. “If one of y’all gotta tell me something, I’m here.” Angelique felt that Susan was speaking directly to her. In prison, Angelique had been a chair of Narcotics Anonymous. “What I realized was I was so busy trying to help other people that I didn’t get the help I needed. I thought I knew everything because I had this leadership role. But I still had this pain, this little girl in me that had not been cared for or nurtured. She was still miserable within my soul.”

Later that day, Angelique went to ANWOL’s office to meet with a counselor. She saw Susan and prayed: “God, show me the way. God, please help me.” She asked Susan if they could speak. “Susan, I relapsed,” she said, breaking down into tears.

Instead of getting angry or threatening to kick Angelique out of the house, Susan immediately hugged her. “Welcome back,” she said.

Susan told Angelique that she needed to go to more NA meetings and get herself a sponsor, which she did. But it was Susan’s love that changed everything.

“When so many people put me down for relapsing, Susan was the one to say, ‘Baby, it’s your story, but it’s not the end of your story.’

“I told myself I’m not doing that again,” she continues. “I don’t deserve that. I don’t want to be that person. I didn’t come out of prison to be that person. Trying to find a high through drugs after you experience joy and love — it’s miserable! I want to continue to strive and become even more of the best version of myself and give back.”

As of today, Angelique has been sober for nearly six months.

Part of A New Way of Life’s method for helping women heal after prison is to encourage them to find their voices in advocacy on behalf of themselves and other formerly incarcerated men and women. Though it’s required to be involved in organizing, some women take to it more naturally than others, throwing their hearts into the work — and that was Angelique.

Angelique has been involved with All of Us or None, the fight to end fines and fees, and the Women’s March, as well as an integral part of ANWOL’s involvement in LA County probation reform. She was drawn to the work because of her own experiences with the probation department, which provided her with no help while she was under its supervision; in fact, certain supports that she needed were unavailable to her since she wasn’t on parole.

In December, Angelique decided it was time to move out of ANWOL housing. “I felt in my soul another woman needs this bed,” she said. “I’ve gotten the tools I needed, so I felt like it was a push for me.”

She moved in with her now-fiancée Linda, whom she had met in prison and then reconnected with again at ANWOL. Linda is as dedicated to advocacy as Angelique and works as an organizer at nearby Community Coalition. “Living with Linda is amazing, to have someone else in the movement, just like I am,” Angelique says, recounting a recent morning when the couple woke up at 3:30 am to volunteer for a labor event.

“It’s a joy for me to be part of this movement. It brings me happiness to change policy,” she says.

Despite getting a landscaping job at CalTrans, Angelique has continued to hope for a role more in line with her passions. And earlier this year, her dreams came true: ANWOL offered her a newly created policy fellowship position that would allow her to immerse herself fully in advocacy and organizing.

“I know my potential to create change, and now I am working with the best of the best,” Angelique says. “Being told, ‘We want you,” is an amazing thing.

“I’m where I prayed to be. God did this! This is where I was meant to be, and I know it. As I’ve done all the canvassing and the phone banking and the testifying in meetings, I’ve just felt it. This is me.”